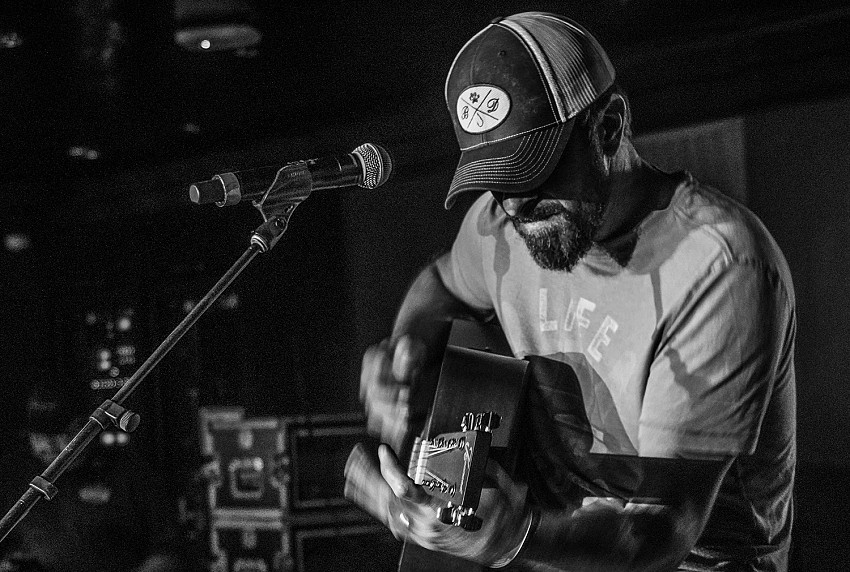 How does a country boy from tiny Bilboa, North Carolina find himself an apprentice to one of the greatest songwriters in country music? Ever heard of Bilboa? Yes, it’s that small. But you’ve heard of Harlan Howard, right? “I Fall to Pieces?” THAT Harlan Howard.

Brian Davis isn’t one to push himself or his music on someone. It just isn’t his style. Fortunately, what is his style is writing great rockers and party anthems full of hot screaming guitar, booming bass and thumping drums. Sometimes.

On the other hand, his style is also writing emotive ballads laden with picturesque lyrics that twist and turn phrases to carry the listener on a musical journey of their own or Brian’s life. Those…those are best interpreted by Brian’s pure masculine baritone and an acoustic guitar.

So, it’s really not a case of having to force himself on anyone. It’s more like, “If you build it, they will come.” If you write great songs, make great music and sing from your heart, they will come. And they have most definitely come. From playing all over his home state of North Carolina, to opening for pal and frequent co-writer Brantley Gilbert on the Hell On Wheels tour—last year and this year, Brian has taken his brand of rockin’ country music from a regional to a national level. His Tarheel fans are sitting back enjoying knowing that they saw the evolution of one of the hottest new artists in the format, while new fans are digging voraciously into his catalog that is already six albums deep.

Almost as if he could forecast the future when he recorded it, his newest album, Under the Influence, is almost a musical biography of Brian – both his life and the evolution of his music. “I’m really proud of it,” he beams. “We managed to put a lot of things that are extremely important to me on this record and tried to kind of balance it out. We’ve got things all the way from ‘Under the Influence,’ which people would assume, based on previous projects, that we were talking about going out and just getting hammered, but it’s not.”

The tune is actually a musical homage to the music that influenced him, and the list is vast and diverse. Early on, his grandfather introduced him to artists like the legendary Gene Autry, while his father exposed him to the contemporaries of his time like Alabama and Hank Williams Junior. Then there was the music of his own youth. “I was a reckless, rebellious redneck, not siding where my mom probably wanted me to a lot of times,” he admits. “I’d find myself listening to your typical AC/DC and Guns & Roses.” The funny thing was, Brian was also discovering and developing a taste for music that was far from mainstream. Artists like Peter Tosh and Bob Marley. “I just love music. I’m just a fan of music.”

But it was more than just loving a great song. For Brian, it also became about creating great music. So, he began to study it and study the process, which was a relatively simple task. “My grandpa played all the honky-tonks where I’m from and my dad did, too,” he says with a smile. “I can remember from the time I was six and seven-years-old I was in honky-tonks.” By the time he was eight, his dad was taking him to gigs and Brian was tuning their guitars. “I was on top of the world,” he says, “because I was tuning guitars for a hero of mine. All I ever wanted to do was be like them because they had that thing. They could walk into a room and pick up a guitar and people would just stop and listen. So, in my head, I was doing something really important.” And although Brian’s mother wasn’t thrilled with her middle child hanging out in honky-tonks, to her credit, she didn’t discourage his pursuit of his passion. While Brian’s dad never chased a national music career, instead choosing to stay close to family, he did write his own music and his son was a sponge observing the process and began writing when he was very young. “The early stuff was terrible,” he laughs. “It was worse than terrible And then it got progressively better. And then when I met Harlan Howard, it got a ton better because I started figuring out how to do it the right way.” Yes, Harlan Howard.

“Harlan Howard was the first person to offer me a publishing deal in town,” he smiles modestly. The story of how it happened is a sweet one:

“I was cleaning horse stalls in Brentwood and Melanie Howard set up a meeting.” Brian showed up with his guitar, but still covered in horse manure, expecting to meet with Melanie. To his surprise, Harlan strolled into the meeting as well. “I was supposed to be with just her and he comes in and she says, ‘If you don’t mind, he’s going to sit in on the meeting.’ And I’m thinking, ‘Oh, F….’ I sit down and he says, ‘What have you got son?’ So I play him the one song. THE song. All of us have THE song. And he smiled and said, ‘What else you got son?’ And I played him a second one. We went four songs deep and after the fourth one he said, ‘Do you want a record deal here, son?’ And I said, ‘Yes I do.’”

The only snag came when Harlan asked him how much money he needed. Brian had never even considered being paid for his doing what came so naturally. When Howard offered him $375 a week, Brian balked saying, “Can I think about that? I don’t know if I need that much?” His humble upbringing and limited knowledge of how the business operated had him thinking that he would have to pay the money back, so he didn’t want to take more than he needed.

Harlan became one of Brian’s greatest mentors in the business, but others followed and Davis learned all that he could from each. “The only thing I’ve been really smart enough to do in my life is listen to people that have been where I’m going,” he says.

Influences that are heard on songs like the raucous “Bang, Bang,” which touts the simple country boy pleasure of shots, whether from a gun or a glass, or in the dark “Another Man’s Woman,” which addresses the dismal destiny of a cheater, or in the simply acoustic love song “Against the World.” And influences that are heard in the crowd-favorite “Lights Of My Hometown.” “You see people’s reaction in the crowd and I think everybody, in their mind, goes to someone that they lost,” he says. “It just has so much power. It’s been amazing and the stories we’ve heard are awesome.”

You see, for all of the in-your-face rockers or rebellious party anthems, Brian is one of the sweetest souls on Music Row. He laughs, “I love the excitement when people come up and, it’s not like I’m some amazing person, but they say, ‘Man, I can’t believe it’s you!’ And I say, ‘Well, I can’t believe it’s you!’ I always ask them their name and hug them because they they could have spent their time and money on anything. And the fact that they chose me is massive in my book…We do this to connect and when you have those kind of moments with people, it makes everything make sense.