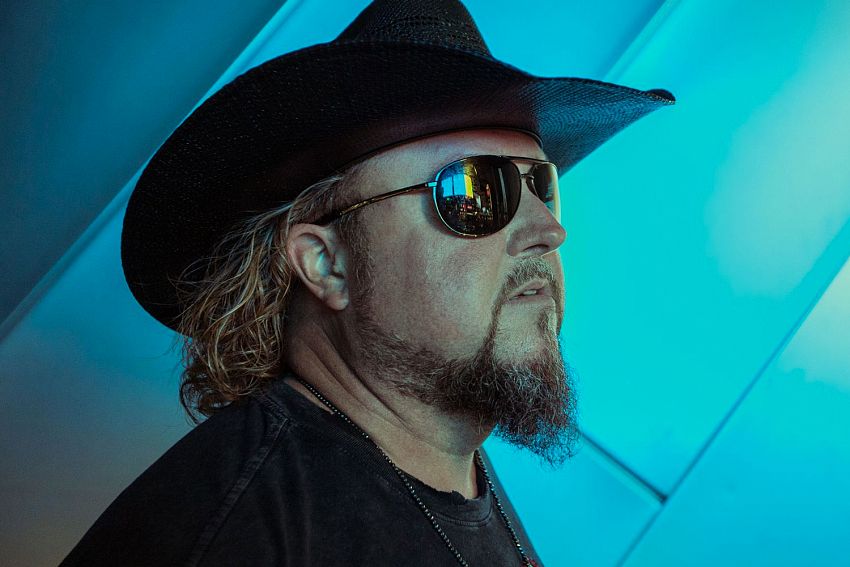 With his sixth studio album, the aptly named Love Hope Faith, his follow-up to 2014’s Thanks for Listening, Colt Ford continues to live out his boyhood dream – the one where you “wake up on a mission/to buy that beat-up Gibson,” as he sings on “No Rest.” Love Hope Faith is exactly that, a message to to his loyal fan base, and a strike against the divisiveness plaguing our country, celebrating the things that bring us together – friends, family, our faith in a better future.

“I’m just trying to bring people together,” says the Georgia native, a one-time golf pro who still frequents the links and the co-founder/owner of his own Average Joes Entertainment. “There’s so much conflict out there, it’s hard to decide who’s right and who’s wrong.”

And while he admits to a populist fan base and down-to-earth, “Keepin’ It Real” attitude, Colt cautions, “I’m not a politician. I’m a musician, a performer. We have to get past our differences and find a common ground.”
And what better way to do that with Colt Ford’s groundbreaking hybrid of country, blues, rock and rap rhythms, who has built up a following that started with mud trucker events and graduated to arena status sharing the stage with the likes of golfing buddy Toby Keith.

From the statement of beliefs in “Reload” (“We can agree to disagree. That doesn’t make you a bad person, I’m just telling you what I think. If you pet that dog, you might get bit”) and the adolescent dreams of “trying to live big in a small town” in “Young Americans,” singing “Free Bird” and “Free Falllin’ to the country/EDM mash-up of “Dirt Road Disco” (“Can there be a more fun song than that?”) and the ode to the joys of running your fingers in the wind of an open car window (“Lookin’ For a Handout”) or “one more shot of Baccardi” in “Time Flies,” Colt Ford breaks boundaries and mends fences along the way.

“I feel more confident than ever as an artist,” says Ford, and while he numbers some of the most important supporters in Music City, his lack of country radio acceptance and award show accolades continues to drive him. “I’ve given it my best shot. Some of that outsider thing is tongue-in-cheek, but some of it is true. I’m unbelievably accepted by artists and songwriters. There’s no one I can’t work with. They know I’m real. I’ve built those relationships over time, and I feel I’ve created a body of work.”

“There are a lot of different styles on this album, but I think my fans will hear it’s just me,” he says. “As long as I remain true to myself, I can delve into all of them.”

Songs like the rock/hip-hop “Dynamite” reference the Scorpions (“rock like a hurricane”), Marvin Gaye (“let’s get it on”), Michael Jackson (“Billie Jean on the radio”) and Jay Z, while the first single, “4 Lane Gone,” sports a full-blown rock intro before settling into a lament for a lost romance in which the individuals are on their separate paths. “My Truck” is a hilarious “can you top this” playground rank-out session, while the anthemic “I’m Mud” is just that, a self-deprecating, but in-your-face song from the perspective of the dirt below (“I’ve been played on, spit at, kicked until I turned to dust”). “Keepin’ It Real” is just that… Colt on staying the distance, “headlights on the highway/just keep going… Beer is cold and life is good.”

“No Rest” probably sums up Colt’s ambitions on Love Hope Faith, his tribute to being a working musician, what he calls “my version of ‘My Way.’”

“I’m proud of that song,” he says. “I think it’s one of the best I’ve ever done. It’s not just about being a rock star, but accomplishing your dreams, a passion that can’t be stopped. Anyone who has that drive will appreciate it. Everybody’s got fears, but when you hear that song, it’s me.”

“I built walls… and I’ll be here when they’re gone,” he says, taking the role of “I’m Mud,” but you know he might as well be talking about himself.

Love Hope Faith is Colt Ford’s musical message, one so universal it tears down those walls, then invites everyone into the tent.